Two persons were crushed to death and seven others seriously injured when a truck conveying cement ran over two commercial motorcycle operators and two vehicles before falling on another vehicle at the Toll Gate corridor of Lagos – Abeokuta today May 8. 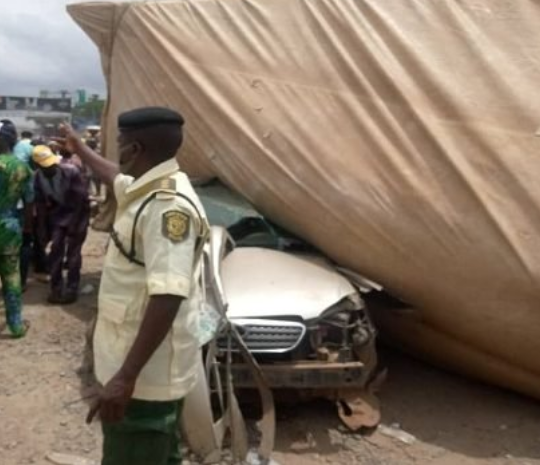 The FRSC and the Ogun State Traffic Compliance and Enforcement Corps(TRACE) rushed the injured victims to the State General Hospital, Ota while the remains of the dead were evacuated to Ifo General Hospital.

The Public Relations Officer of TRACE, Babatunde Akinbiyi, who spoke about the incident said

“The truck was inbound Lagos through the Tollgate when it suddenly developed break failure. In the process, several vehicles and motorcycles in its front and by its side were hit, knocked before it eventually fell on one of them.

The truck in question was fully loaded with cement. In all, 9 casualties were involved, but it can’t be ascertained if they were all in the truck or among the vehicles hit, knocked, rammed over or the one the truck fell on.

Government releases over 20 guidelines for churches

Nana Addo speaks on the death of George Floyd

COVID-19: Ghanaians are not dying in hundreds like other countries – Akufo-Addo

Man finds out his 4 children belong to another man

BREAKING: Obuasi on total lockdown as they record over 1,200 positive cases

The whole of Obuasi Municipal is on total lockdown as the number of confirmed cases massively spike up from 32 to 1203 in just...
Read more
News

The Ghana Health Service has rendered an unqualified apology to Ghanaians over some mishaps which occurred on the official COVID-19 updates website as regards...
Read more

Former Chelsea striker, Diego Costa made an appearance at a Madrid court on Thursday to ratify a deal he made with Spanish prosecutors to...
Read more
Odd Stories